• 1930’s Detached House in Gartconnell district
• 3 Bedrooms, 2 Public Rooms
• Kitchen, 2 shower rooms (1 ensuite)
• Gas CH, Double Glazed, Alarm, Garage
• Good size, level, garden
• Bearsden Primary and Academy catchment
• A charming cottage stye home
• Bearsden Cross only 1/3 mile away
One of the original 1930’s properties built by the admired Bearsden builder, John Russell, in the enduringly sought after Gartconnell district. A charming traditional property, almost cottage style in appearance, it has five apartments (2 public rooms and 3 bedrooms), the majority of which are on the ground floor. Owned by our client since 1986 this is the first time in a generation to acquire it.
Over the last thirty-six years investments have been made but there I no doubt that elements of the subjects would benefit from some modernising. It is, very much, a well-maintained home and one that should appeal to couples, its largely on-the-level accommodation making for easy living, but also to families given that whist there are three bedrooms there is clear scope, given the size of the garden plot, to extend/develop subject to obtaining the necessary planning consents and approvals.
A huge draw of the property is its location – Gartconnell is undoubtedly one of Bearsden’s most sought-after locales given its proximity to Bearsden Cross and the nearby beauty spot of Kilmardinny Loch, and its surrounding woodland walk.
Brick built the house is finished in white painted render under a hipped and slated roof. Windows were replaced, early after our client acquired the house, with double glazing by cr Smith. Central heating is mains gas and here, in 2014, the boiler was replaced with a Worcester Greenstar 28 Si Compact condensing boiler. The kitchen, with small extension, is modern and fitted with shaker style units and the ground floor shower room (formerly a bathroom) there is a modern white suite. The second shower room, ensuite to bedroom 3 on the first floor, is more dated with a suite in whisper pink. The house has an attached single garage, wider than standard.
Ground Floor
• Entrance vestibule with storm doors.
• Hall – with a fairly recently installed double glazed front door.
• Lounge – with a wide 7-frame bow window to the front (additional window to the side). Fireplace with a post -war stone and marble hearth.
• Dining Room – windows to rear and side
• Kitchen – cream coloured units with a walnut style worktop. Appliances include: Halogen hob, double oven, cooker hood, fridge, freezer, dishwasher, washing machine, and tumble dryer. Double glazed back door.
Bedroom 1 – with a suite of fitted bedroom furniture.
• Bedroom 2 - a smaller double bedroom, used as a TV room.
• Shower room – All tiled. White suite including a corner shower enclosure by Huppe. Electric Triton T300 Si shower.
First Floor
• Bedroom – 3 the largest bedroom, also with some fitted furniture. Dormer window to the front plus Velux window to the rear.
• Ensuite – A 1980’s/1990’s vintage suite in a whisper pink colour. Standard size shower enclosure with Triton T300Si electric shower. Velux window.
Garden
The garden is level and lies mainly to grass, the rear garden having a large patio area. The driveway would take two cars. The front of the house faces south, the rear northwards. The main shrub bed in the front garden features a fine Acer tree. Laid for ease of maintenance it provides a canvas for those who may have more ambitious horticultural intent.
Sat nav ref: G61 3BT 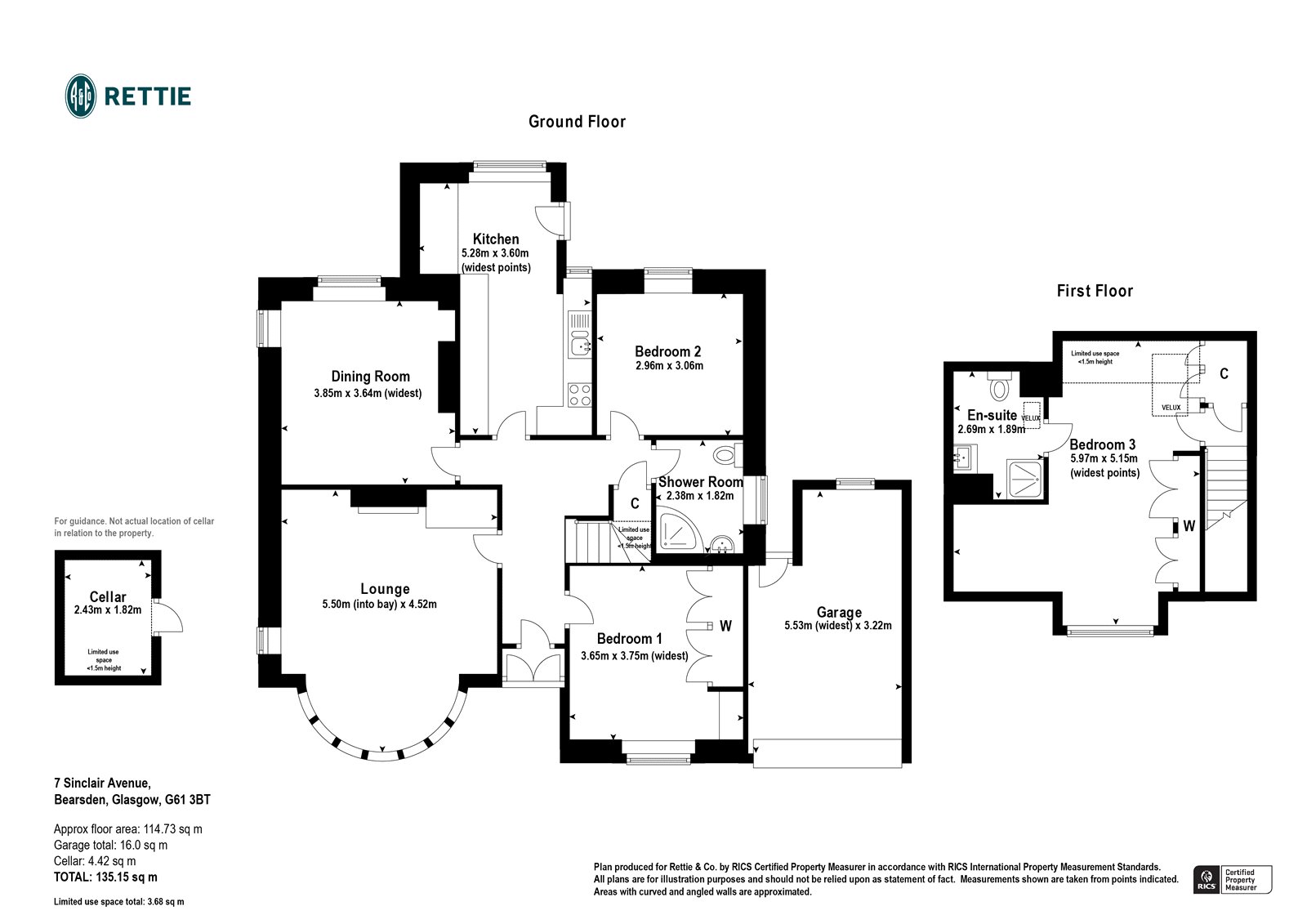 Want to know what people who know the area really think? Use the link below and see all the results for G61 area.
Ask on Facebook
Ask on Twitter