A fabulous country house estate dating back to the 17th century, privately situated in just under 19 acres.

Hope Hall was built in the 1600's, as one of the great houses of the Bramham Estate. Sir Thomas Fairfax lived here, back in the 1640's as he lead the New Model Army into battle during the English Civil war. Much later, important archaeologist Pitt Rivers was born here in 1827.

The house has clearly evolved over the intervening years but from 1921 Hope Hall would have housed the Hunstman of the Bramham Moor and the other staff would have lived in the adjoining two cottages (namely the hunt Whip and the Stud-groom). The resulting collection of properties was abandoned in the early 2000's but acquired in 2009 by the present owners who saved the buildings from almost certain dereliction. Over the following three years they set about renovating, reconfiguring and extending the various properties to create the well balanced estate which stands today, comprising the main house, two adjoining cottages, a separate apartment above the garaging, stabling and a steel framed agricultural barn.

Certainly the oldest part of the estate, the main house has clearly been extended and improved over its 400 year history, receiving a grander façade and larger wings, built from the same local sandstone sourced from a nearby quarry. Inside much has changed, the entire house having been sensitively renovated and refurbished, including a new slate roof, updated central heating system and wiring, also receiving a large orangery forming an inviting dining area off the kitchen/breakfast room. None of the original character has been lost, period features taking centre stage in the majority of rooms, each of the key reception rooms of near perfect proportion, all bathed in copious amounts of natural light. There are five good-sized double bedrooms, all with recently fitted en suite bath/shower rooms, in the main house with a one bedroomed self contained apartment to the rear.

There are two self contained cottages incorporated into the estate, both refurbished to the same high standards, the two cottages adjoin the main house and across the courtyard and above the garaging is an apartment. Cottage one could be re-connected to the main house if desired but currently offers two bedrooms, a bathroom, cosy sitting room and well equipped kitchen/breakfast room. Next door is a larger two story, four bedroomed cottage, with spacious living room and modern kitchen, both with small terraced gardens and parking spaces to the front. There is also the self contained apartment across the central courtyard garden, above the triple car port, access is from a lobby area with a door to the staircase leading up to the apartment which has three bedrooms, two bathrooms and with views across the neighboring paddocks and woodland beyond.

The Outbuildings and Grounds

Approached via pillared cast iron gates and a meandering tarmac driveway, re-laid by the current owners, the outbuildings and main parking area is straight ahead to the central courtyard, the formal driveway splits to the right and leads to a gravelled forecourt. The buildings briefly comprise of nine stables, a feed room, tack room, drying room and two wash rooms, supported by four stores and a purpose built barn (40m x 60m) which incorporates a horse walker, behind which is an all weather arena.

There are numerous garden areas around the house and cottages, many with flagged seating areas bordered by colourful plants and shrubs. These give way to open lawns which envelop the whole estate, bordered by paddocks to the north and mature woodland to the south and open farmland to the east and west. The property stands in just under 19 acres in all and benefits from a degree of privacy rarely enjoyed in the area and fabulous views in every direction.

Location
Hope Hall is conveniently located between the villages of Braham and Thorner, the market town of Wetherby being about four and a half miles away, providing an excellent range of local artisan shops, three supermarkets and essential services, including a doctors surgery, several dentists and both primary and secondary schools. There are numerous golf courses in the near area, including Scarcroft, Alwoodley, Moor Allerton and Rudding Park and the surrounding countryside provides miles of walking and cycling routes.

Regular commuters will appreciate the communication links, the A1M being just a mile from the house, providing links to Leeds, York and further afield. There are rail links with London and Edinburgh from both Leeds and York and Leeds/Bradford airport lies about fifteen miles away.

Please note all distances and travel times are approximate. 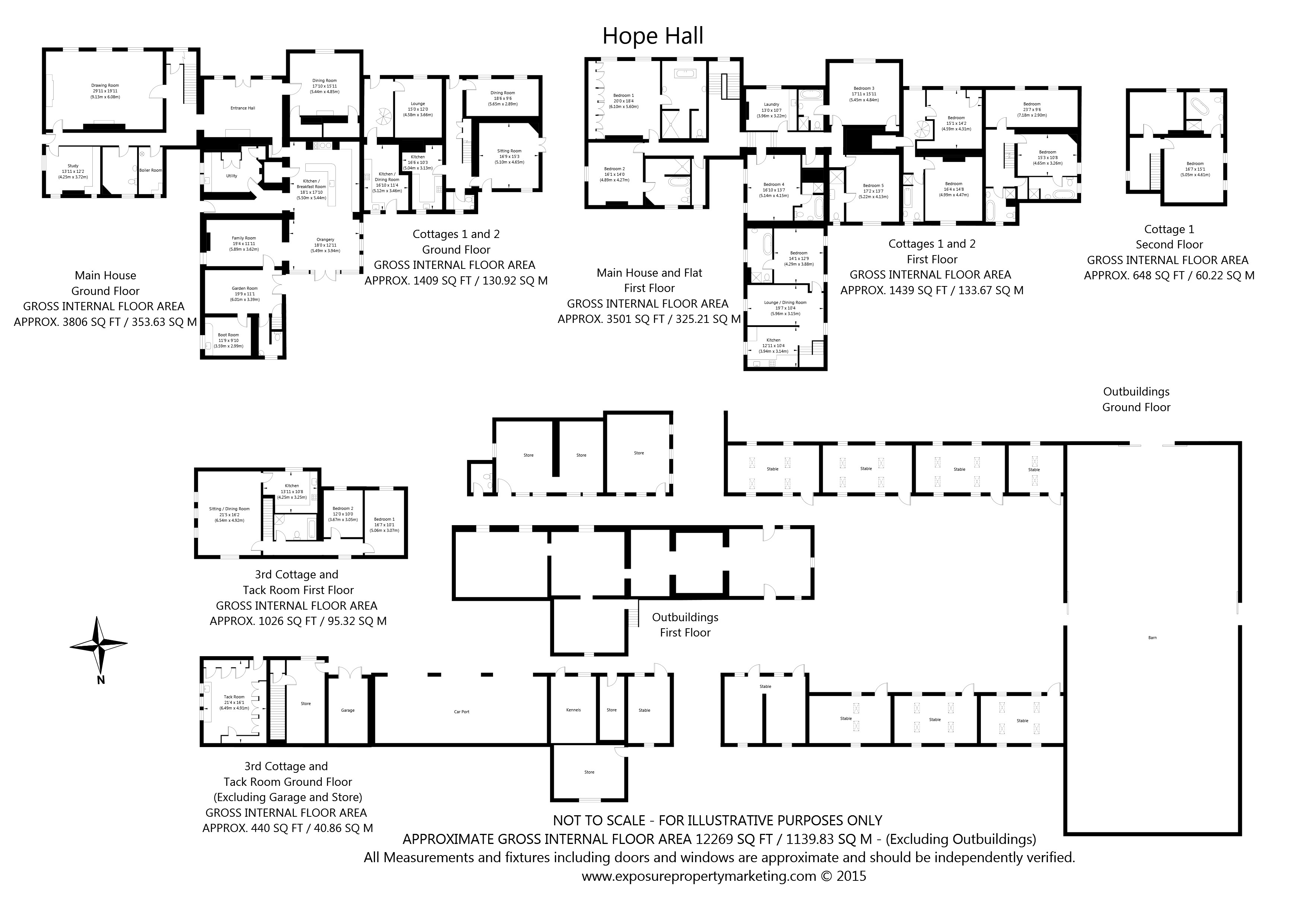 Want to know what people who know the area really think? Use the link below and see all the results for LS23 area.
Ask on Facebook
Ask on Twitter